Ask Coach: What Is A Leebow?

Welcome to Ask Coach! Where we take your questions on Tactics, Strategy, and Boathandling. In our first installment, let's cover the Lee Bow. This is aimed at beginning to intermediate level racers in order to let them formulate questions they can bring to their coach, so we've tried to incorporate appropriate explanations and language.
We think it's important to agree on the vocabulary coaches and sailors use, so as there are many different ways to explain the same thing - make sure you know the difference between Tactics and Strategy
What Are Tactics?
Out on the race course, you'll be faced with many situations where you have to make a decision, sometimes before you even get to the situation (ahem - *mark roundings*). These decisions are what we call tactics. You can think of tactics as the little steps you take in order to achieve your strategy of success.
What Is Strategy?
Strategy is the overarching plan for the regatta, race or part of a race. It's important to know the difference because you need to be able to keep the strategy in mind when you're confronted by a tactical situation. Example: Do I let this boat cross? Do I Lee Bow them and push them out to the left?
What Is A Lee Bow?
A Lee Bow is a tactical maneuver where you tack below and bow forward an opponent to affect their boat speed with your wake and sail (specifically the turbulence off your sail). Check out the diagram below: 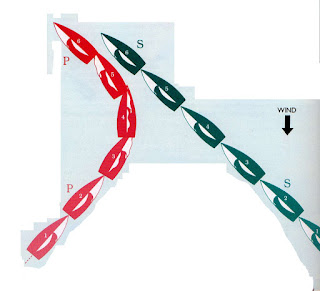 http://www.sailingbreezes.com/Sailing_Breezes_Current/Articles/Aug02/dell0802.htm
What Doesn't Work - Full In, Full Out
The goal is to do a normal tack and end up bow-forward and close to leeward. The challenge is to know when to begin the tack. That’s the part that takes practice. To limit the risk of fouling, learn when to start your tack and how to exit with good speed.
After the tack, sail in a normal speed mode and be patient. There is no need to pinch. In fact, keeping the normal target speed usually gets you the best height, which is what will ultimately allow you to slow the boat on your hip.
The basic rule of thumb for deciding whether to leebow or duck is your relative position. You will struggle to execute a leebow if you are aft of bow-to-bow in the cross, but sometimes you can tack to leeward and ahead, with as much as a boatlength between, and still affect your opponent. If you’re crossing but want to leebow, tack just before you are straight ahead of your opponent. If you’re not crossing, but advanced on them, get as close as you feel comfortable, legally, and tack there. The important point is to end up bow forward when you are up to speed on the new tack. From there, your clear air and ability to sail your normal course should eventually hurt the performance of your opponent.
Slowing the boat (unintentionally or not) as you go into a leebow tack is a common mistake. Pinching as you get close to the starboard boat reduces your closing speed and allows you to more comfortably pick your time to tack. However, that slows you down, requiring a bigger speed build after the tack, causing the boat to make more leeway, and leaving you in a worse position than a normal tack. This is especially true when it’s choppy.
Team members sneaking off the rail early to be “in position” is another speed-reducer, making a good tack less likely. Likewise, pushing really close to your opponent and then turning faster also slows you down, as well as making you more vulnerable to protest. Trust your teammates. The driver and trimmers need to see the other boat. The rest of the team needs to concentrate on nailing the tack.
Think of it this way…full in, full out. That's how you get a perfect lee bow!
Remember Rule 13!
Rule 13 states -

After a boat passes head to wind, she shall keep clear of other boats until she is on a close-hauled course. During that time, rules 10, 11, and 12 do not apply. If two boats are subject to this rule at the same time, the one on the other’s port side or the one astern shall keep clear.

If you’re not crossing before you try to leebow, but advanced on them, get as close as you feel comfortable, legally, and tack there. If you time it wrong, you will be walking into a Rule 13 situation and if your opponent's sail breaks (that is, luffs) you are in the red. Remember that the important point is to end up bow forward when you are up to speed on the new tack. From there, your clear air and ability to sail your normal course should eventually hurt the performance of your opponent.
Final Thoughts
We hope you enjoyed this video and writeup, if you have questions on it, feel free to send us a message or better yet, take your questions to your Coach and ask if you can cover this topic for a little bit. Its just one of many tactical moves you can make but it can help your race TONS. See you on the next one!