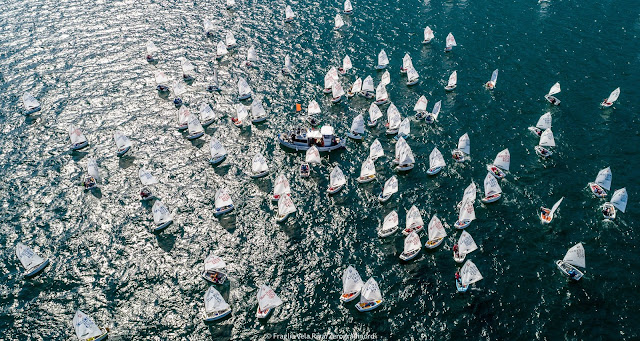 Historic times for the Optimist Class and the news keeps coming in - the Fraglia Vela Riva, host of the world's largest Optimist Regatta announced today that they are rescheduling the Garda Optimist Meeting for August 19-23.

Coupled with the re-do for the European Championships gives a new splash of hope to the European Optimist circuit, and although the calendar is still very much in disarray there is hope that regattas and championships will begin to make a slow and hopefully steady return.

What this means for international kids that are hoping to come from overseas remains to be seen, but as of today this cornerstone event of the international circuit is now back in 2020.


FRAGLIA VELA RIVA, LOOKING FORWARD AND POINTING TO THE GARDA OPTIMIST MEETING IN AUGUST
We start to breathe restart air at Fraglia Vela Riva house and bring this boost of positivity after the long months of stop is the event that has been characterizing the competitive season of the Club of Alto Benaco, the Garda Optimist Meeting, which from 19th to 23th August it is estimated that many young sailors from all over Europe will be called to Riva del Garda.
A well-thought-out choice, that of the Fraglia Vela Riva board, which after the decision to cancel the 2020 edition of the Optimist World Championship, bets on the restart and chooses to do it with the Class that maybe more than all made the circle famous Gardesano in the world.
′′ We have evaluated this decision for a long time, also because protecting the health of our little athletes and the entourage that moves with them has always been our priority. Then we said that the regattas should start again, even the youthful ones, and we might as well start from the event we are all most fond of, the Garda Optimist Meeting ′′ said Fraglia Vela Riva, Alfredo Vivaldelli.
′′ We still don't know how to estimate the number of participants that will be with us in August for this edition of the Meeting that, after so many years, moves from Easter to Ferragosto week. Of course the staff of Fraglia Vela Riva will put all their forces on the field to ensure a fun and especially safe event Vivaldelli concluded.