So for our first Gear Review Article we picked the 3D-Printed Coach Kit from 3D Marine and More, a german company we found through instagram, and found really interesting. Often times, coaches are looking for every edge and tool available to bring their kids to the next level and we think this could be helpful for many coaches working at all levels - because kids love interactive sessions with coaches instead of coaches just talking at them.

We had reached out to 3D Marine in early March and a very nice lady by the name of Tarja sent us not only the 3d coach kit but also their Pro Racer Flag Kit, Regatta Elements Kit, Compass and Start Watch. Here's our thoughts and why we think you should think about picking this set up

The 3D Printed Coach Kit is 3D Marine And More's first offering, which actually came from a request from the coach at the Potsdamer Yacht Club for a 3D-printed opti for some trophies, but the concept was so interesting they developed this magnetic coach kit specifically for Opti coaches.

Our first impressions when we received the kit is that the boats are smaller than we thought, but after playing around and testing them they are a really good size. The boats measure in at just under 2 inches (5 cm for you metric types) so they are big enough to be easy to see on a board as well as be small enough to pack into your bag.

The set includes eight (8) boats and 6 marks which is enough to complete a trapezoid course with a gate with a starting line. The boats come in a multitude of colors, which we thought was great for kids especially in green fleet, which can hold their attention a little longer than the typical 4 colors that other magnetic boat sets include.

3D marine also includes a spare set of mast/boom combos because well, things happen and we work with kids. This allows you to work with the boats and talk about sail trim and body position, and as the kit brings 8 boats its enough to talk about large tactical situations and starting line tactics. 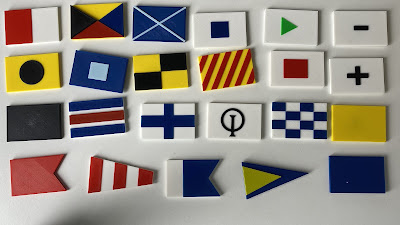 The Pro Racer Flag kit is a really cool addition to the 3D Marine offerings, as it includes most - if not all - the flags you'll need to talk to the kids about racing. It includes the flags you see above and they are all made of the same sturdy plastic that the boats are made out of. The kit also includes a race committee boat, which we found odd to include with the flag set since we thought it would come with the coach kit with marks and boats.

In any case we see a lot of possibilities to show your sailors the flags and meanings since they come in the correct, true-to-life colors and you don't have to wear out your dry-erase markers drawing flags in different colors! 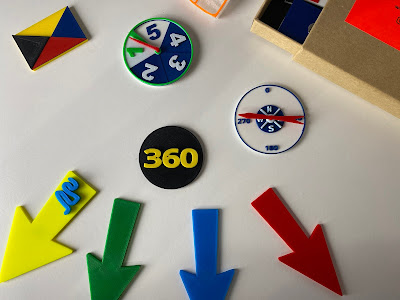 The Regatta Elements Kit is a straightforward addition, and provides color indexed arrows to denote wind direction and shifts: green for right shifts and red for left shifts. The current indicator has a 3d printed part to denote the current, which we enjoyed but will still have you telling them what it is. We suggest making the arrow itself wavy, that way its even easier to distinguish.

The compass and watch however, is an interesting addition because although there is definitely need for a visual aid for time in a chalk talk, we just are not sure we would pay the extra for the compass and watch when it could just be drawn on the board. But then again, if you don't have a board handy, this would become very useful. The 360 puck we are not sure of what it's intended to be used for, but we tried using it to denote fouls and penalty turns. Worked out pretty well.

We took a good look at the kits that 3D Marine And More sent us and found that although we wish the coach set included the arrows, and that the sail pieces were more permanently attached to the boats, we love the idea of incorporating them into our coaching groups and we've already seen kids react positively to them.

We think this set would be best for opti coaches working with green fleet and RWB sailors starting out on the USODA circuit, but any coach can bring some more color and interactivity into their chalk talks with these boats. We also think that if you are considering getting anything from 3D marine, definitely pick up the magnetic flag set. It will make your life easier when in front of the board!